So you need to double (or triple, or quadruple) the clock speed...

Winston
June 2010 edited June 2010 in Hardware
No particular reason for posting this, other than I was looking at an eZ80 evaluation board that does this, and that jogged my memory of a project I'm thinking of doing over the winter. And that I've seen the odd project here that's needed to use a faster clock than the 3.5MHz one you find at the edge connector, so they've soldered a wire to the 14MHz clock that drives the ULA... so I think for anyone contemplating such a project, this may save them from having to solder things to their Speccy motherboard. So a quick primer on clock multiplication is in order.

So: Problem - you want to make some sort of device. It needs a clock that's faster than the Spectrum's (say, 7MHz or 14MHz or 28MHz) but is synchronized with the Spectrum's 3.5MHz clock.

The solution: Another oscillator of the frequency you want, that's somehow kept in sync with the master clock.

The method: Something called a phase locked loop. Effectively, what you have is a voltage controlled oscillator and a phase comparator. The VCO is set to oscillate at the frequency you want, and if it gets ahead of the master clock, the phase comparator changes the control voltage to slow the VCO slightly until it comes back in sync. If the opposite happens, the phase comparator does the opposite and speeds the VCO slightly to get it back in sync. Here's a block diagram of what you do:

To demonstrate this working, I used a 74LS629 voltage controlled oscillator, a 4MHz crystal oscillator and an Xilinx XC9536 in which I built the phase comparator out of digital logic. There's actually a chip to do all of this (74HC4046, which has the phase comparator and VCO all in one chip) which I would have used if I have one, but I don't. (And I'd recommend you use one for things like this since they cost 25p from Farnell and will save you having to either use a bunch of macrocells in your CPLD, or soldering a heap of 74-series logic to make your phase comparator). But in any case it's interesting to understand how these things work. The phase comparator looks like this: 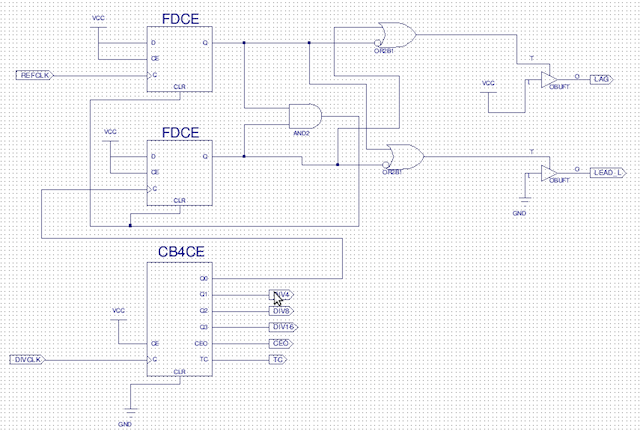 Here is how the phase comparator works. It's built out of two D-type flip flops and a few gates, and a couple of 3 state output drivers (which are connected together off chip and passed through the low pass filter).

The top flip flop is clocked by the reference clock (i.e. your 3.5MHz clock if you're using a Spectrum, but for the demo, it was 4MHz). The bottom flip flop is fed by the VCO divided by N, in this case, divided by 2 by the counter (CB4CE's first output) in other words, this is set up as a frequency doubler which will give an 8MHz output. The counter is of course fed by the actual VCO's output, the 74LS629.

Now imagine the VCO has a frequency slightly higher than 8MHz. What will happen is that pretty soon, the two signals will start going out of sync - in other words, out of phase. The VCO will start to lead the reference clock. This means the bottom flip flop will spend some time with its output at logic 1 before the reference clock's flip flop reaches logic 1 and resets both flip flops. This in turn will turn on the output buffer and will mean the pin LEAD_L is no longer floating, and will be grounded.

If the opposite occurs - the VCO is slightly slow - the reference clock's flip flop will spend some time outputting a logic 1, which will turn on the LAG pin - it will no longer float but instead be connected to 5v.

Pass these through a low pass filter, which is just a capacitor and resistor - effectively a simple digital to analogue converter (see some of the discussions on how to make analogue waveforms with the Spectrum's speaker for more on this) - and you get a voltage that increases the longer and more frequent the +5v pulses are, and a voltage that decreases the longer and more frequent the 0v pulses last. This then goes to the input pin of the voltage controlled oscillator, y et voila, we have an 8MHz signal that is kept in sync with the 4MHz master clock. Indeed, this is exactly how one of the phase comparators in a 74HC4046 actually works.

(There is a bit of jitter on my circuit as built, about 15ns or so. I suspect a 74HC4046 will perform much better, and it doesn't help that my circuit is built on breadboard - the voltage changes to control the oscillator are tiny and just moving the breadboard away from my computer changed the nature of the jitter Update: I got the jitter down pretty much to zero by tinkering a bit with the low pass filter). 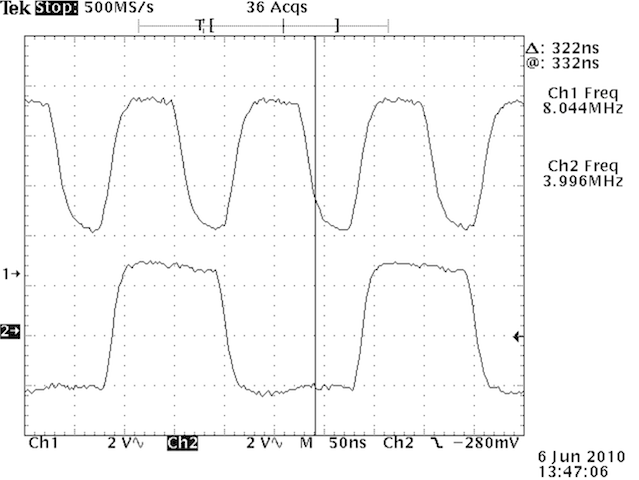 It's worth noting that if you divide the reference clock down by, say, 16 - you can synthesise all sorts of frequencies with a circuit like this, not just powers of two of the reference clock that are kept in sync with your accurate crystal oscillator.

And here is the breadboarded demonstration circuit: 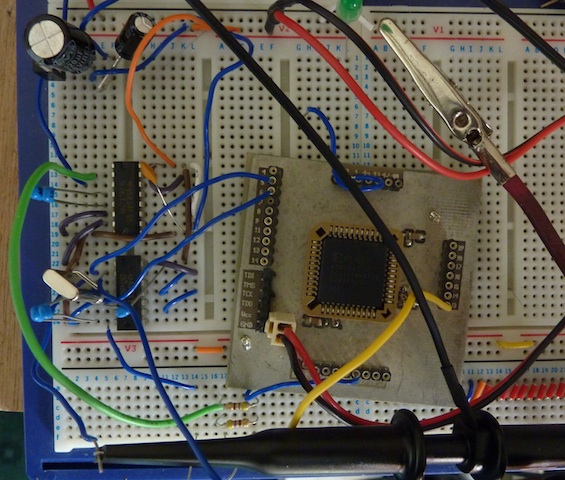 Note my breadboard isn't as tidy as csmith's Harlequin :-) The chip on the top left is the 74LS629. The green wire is the control input (voltage from the low pass filter). The low pass filter itself can be seen just below the PCB with the CPLD (the capacitor is hidden by the oscilloscope probe). The frequency setting capacitor for the 74LS629 is just below the green wire to the left of the chip.

The bottom left chip is a schmitt trigger inverter and it's here for two reasons - to improve the wave form (make it more square) from the 74LS629 and give it proper 5 volt swings and also to provide the 4MHz crystal oscillator circuit which is the reference clock. (The two capacitors are just the load capacitors for the crystal oscillator). The CPLD is an XC9536, but this could easily be done in discrete logic.

When using a 74HC4046, you still need the external low pass filter and the frequency setting capacitor to set the mid point of the VCO, and of course a reference clock. The '4046 also provides a choice of three kinds of phase comparator, one of which is a simple XOR gate.
Post edited by Winston on June 2010