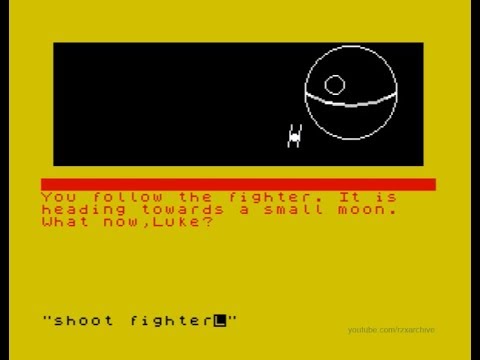 Comments: "Star Wars was - of course - all the rage in 1984. Three mega hits had come and gone, although I was starting to lose interest by Jedi. Probably the less said about the new films the better. As such, I was keen to develop the concept into an adventure game, and so I chose Star Wars - not because it was better then Empire, but because I had a VHS copy off HTV Wales. It also suited the adventure game format better than Empire, which had lots of hanging about with Yoda. I can't recall how long it took to write this one, but is was probably in he region of four months, and was really the first of my mega adventures, i.e. quite long to play and bloody too long to program! (I should have known when I was well off, The Girl Who Was Death took more than a year). My main memory of writing this game was enjoying making the graphics a whole lot more than writing the code. It's worth loading now just to hear the hilariously out of tune version of the Star Wars theme I was trying to copy. To prove I can hold a tune though, refer to Girl Who Was Death that mimics the cricket scene music beautifully!"