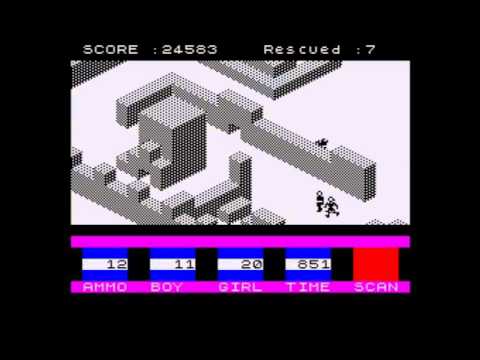 AntAttack: Known Errors: The 1984 microdrive version (on the {Games Cartridge|Sinclair Research Ltd}) is slightly corrupt.#When playing the boy, after landing from a jump the graphic is "damaged":##

##Geoff Wearmouth explains:#"The tape version of Ant Attack has a short 76 byte BASIC bootstrap which then loads the entire 41K memory map including BASIC up to 65535. That affords a good level of copy protection.##For microdrive loading a 600 byte buffer was required for a start. This was achieved by using variables to replace zero in the substantial BASIC program.##Andy Pennell was responsible for duplicating the Games Cartridge. Because of the way LDIR works you often get copies of BASIC and machine code in the spare section of memory. It is never cleaned.##Andy would have tried to reduce the loading time as much as possible.##At the end of the tape there are several K of zero bytes. easily recognisable and these will have been cut out.##Also 6K was trimmed from the BASIC by using variables for 0 and -1 in DATA statements - tape left, microdrive right.##

##Unlike the Tape version which has no LOAD command the microdrive version has a line 9999 which loads the code from microdrive and then executes machine code. This among other things assembles 'RUN' + CHR$13 in memory somewhere, manipulates the error stack pointer so that instead of the Program finished message it autostarts from false BASIC.#The graphics corruption is in the region of the normal stack position and I think that at loading or during preparation the block has been saved with a normal RAMTOP."